Weekday mornings until 9AM.
Tune in Monday through Friday for information, features, sports, weather and music.

“To come out to an actual live performance, I think, just does so much for that ambition to want to further your studies and interest in the instrument or your art.” -John Parrendo

Lincoln Park Arts will be presenting “Fiddle In The Box” featuring violinist John Parrendo at the BlackBox Theater this Thursday, October 20 at 7:00 PM. The show is part of Lincoln Park’s “In The Box” series, which features smaller music combos and groups for a more intimate performance.

“We’ve had jazz, Latin, country-rock…all different varieties of things,” spoke Eric DeFade about the BlackBox Theater. “It’s an amazing venue that can be converted from regular concert seating to a venue with tables and a bar in the back…kind of like an instant pop-up nightclub.”

DeFade joined Parrendo to discuss “Fiddle In The Box” on the October 17 edition of A.M. Beaver County; a show that Parrendo describes as a show with much variety. “This Thursday, you’re going to hear a little bit of everything,” he stated. “Pop, rock, country, jazz, instrumental…it’s not just going to be fiddle, but violin and some of the music I’ve played over the years including music from some of the artists that have inspired me over the years that I’ve been playing.” Parrendo hinted at the songs spanning “from Frank Sinatra to Dave Matthews” and hinted that there may be a Charlie Daniels song or two scattered into the evening’s repertoire.

Tickets for “Fiddle In The Box” are still available for Thursday’s show. Click the logo to the left for a link to the tickets page, or you can call the Lincoln Park box office at (724) 576-4644 for this and all other shows this season at Lincoln Park.

To listen to the interview with John, Eric, and Matt, hit the play button below! 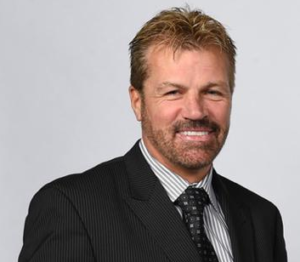 “This team is built to win right now.”

That “team” is the Pittsburgh Penguins, who open their 2022-23 regular season against the Arizona Coyotes at PPG Paints Arena on Thursday night. The Penguins Penguins Radio network color analyst Phil Bourque joined Matt Drzik on the morning of the game (October 13) to discuss the upcoming season for the Penguins, who signed Evgeni Malkin and Kris Letang to extended contracts during the past offseason.

“They need to pay ownership and management back for bringing the team back together again,” Bourque said, “Because a lot of people thought ‘There’s no way we can bring Tanger AND Geno back’, and they found a way to do that.” The return of Malkin and Letang with Penguins captain Sidney Crosby marks the 17th consecutive season of the trio playing together–tying the North American sports record.

Penguins management added several new faces to the lineup in the offseason, including Ty Smith, Jan Rutta, and Ryan Poehling…but the one new face that Bourque sees having the biggest impact is defenseman Jeff Petry. “Jeff Petry is a guy that I think will lighten the load for Kris Letang, as far as what’s expected for a defenseman for driving some offense,” Bourque stated. “The one thing we were kinda lacking was jam, some toughness on the backside. That’s why I think they moved Mike Matheson and John Marino, and brought in Jan Rutta and also Jeff Petry.”

As far as the matchup against the Coyotes, Bourque favors the Penguins on paper, but the Stanley Cup Champion knows the dangers of overlooking an opponent: “If you’re peeking a little bit towards your next opponent, which is against the Tampa Bay Lightning on Saturday night, you’re gonna get punched in the nose in your home opener against Arizona.” Bourque suggests that in order for the Penguins to win tonight, is to “have a great start, get the fans into it, get the lead, and then just pile on.”

Coverage for the Penguins’ game against Arizona on Beaver County Radio begins with pregame at 6:30 PM, and then Phil Bourque will join play-by-play man Josh Getzoff with the call of puck drop at 7:00 PM.

To listen to the full conversation with Phil, hit the play button below! 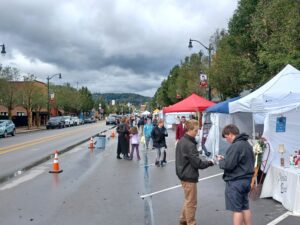 “The purpose of the event, really, is just to get people into our downtown to see what New Brighton has to offer.”

The event being referred to by New Brighton borough manager Tom Albanese is the 4th Annual New Brighton Fall Fest happening on Saturday, October 15 from 12:00 PM until 6:00 PM. Albanese joined Matt Drzik on the October 11 edition of A.M. Beaver County to preview the Saturday afternoon event.

Local businesses and vendors will take over the parking spaces outside their facilities (traffic along Third Avenue will remain open to the public) to promote their food, services and crafts…along with live music and midway activities for the kids throughout New Brighton. There will be no food trucks at the event, as Albanese and the borough hope that attendees who will visit the Fall Fest take a bite out of the local restaurants whose food will be stationed at the main intersections of downtown. Beaver County Radio will be broadcasting live from Fall Fest as well from noon until two, featuring the Prize Caddy & Personality Prize Wheel.

Albanese says that all the vendors are set in stone; however: “We had a couple cancellations so there might be a spot or two available if anybody is interested.” Interested groups or parties may reach out to the New Brighton Borough by calling 724-846-1870, or by directly emailing the festival runners at nbfallfest@newbrightonpa.org.

“Ladies’ Day Out” To Be Hosted By St. Barnabas Charities On October 8

St. Barnabas Charities will be hosting its annual “Ladies’ Day Out” at Trees Manor in Gibsonia on Saturday, October 8th from 11:30 AM to 2:30 PM. The event will feature live music, local vendors showcasing their merchandise, a basket raffle, 50/50, and prizes given away every 30 minutes!

Proceeds from “Ladies’ Day Out”–one of five annual events held by St. Barnabas Charities–go to the Free Care Fund. Tickets can be purchased by going to this link, where they can find out more information about the event.

Shelli Sommariva of St. Barnabas Charities joined Matt Drzik on the October 7 edition of A.M. Beaver County to discuss “Ladies’ Day Out”. To hear the full preview, hit the play button below!

Shelli Sommariva joins Matt Drzik following the 8:35 news to talk about the “Ladies’ Day Out” event presented by St. Barnabas Charities on October 8 at Trees Manor in Gibsonia.

Frank Sparks begins the end of your work week with local news at 6:30 on A.M. Beaver County. 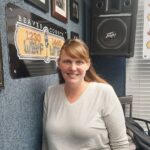 Those in Beaver County who are invested in their wellness and exercise–or those who want to start–will soon have a new opportunity in a new location. 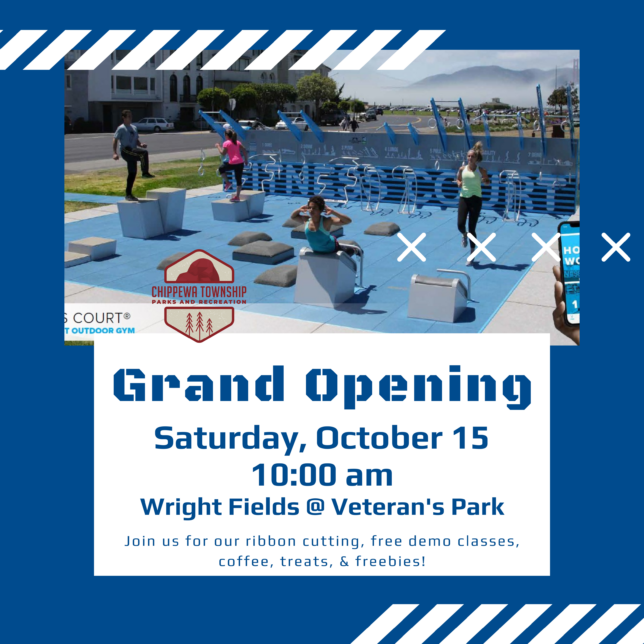 On Saturday, October 15, a new Fitness Court will be officially opened by Chippewa Township at Wright Field @ Veteran’s Park. The track was created in conjunction with the National Fitness Campaign, whose app will allow users to follow along with everyday classes on their phone. The NFC also donated a $30,000 grant to Chippewa Township for the building of the Fitness Court.

Chippewa Township Parks and Recreation director Lauren Doyle spoke about the new addition to Wright Field @ Veteran’s Park with Matt Drzik on the October 6 edition of A.M. Beaver County. Doyle stated that the fitness court is free to use and is open to the public in Beaver County. “We’re hoping to have the local high school athletes and local police to come out and do competitions and just have a good time,” Doyle stated. She added that there will be a local fitness trainer and several scheduled classes throughout the week: “We have the flexibility to work around what the community wants.”

Come now to the campus, true sons of Geneva,
With one accord in song your voices raise.
Proclaim loud the glory those walls old and hoary,
The college where I spent such happy days.

Those words from the first verse of Geneva College’s Alma Mater will be reflected this weekend, as several loud and proud alumni from years and decades past will gather up on College Hill to celebrate Homecoming Weekend beginning Friday, October 7 and all day on Saturday, October 8. Public Relations director Lindsay Courteau joined Matt Drzik on the October 6 edition of A.M. Beaver County to talk about the harvest of events that will be occurring at Geneva College this weekend.

Beaver County Radio will be part of Geneva’s Homecoming as well, starting with an appearance by the Prize Caddy in the Homecoming Parade beginning at 10:00 AM in downtown Beaver Falls. The parade will start at the intersection of 12th Street and 7th Avenue, and make its way up to the top of College Hill and the entrance to Geneva College. This, along with a 5K/Fun Walk at the Merriman Athletic Complex will begin the full Saturday schedule, culminating in the crowning of the king and queen of the homecoming court at pregame of Geneva’s afternoon tilt with Allegheny College. Frank Sparks and Curtis Walsh will have the Personality Prize Wheel going up until kickoff, and Beaver County Radio will have pregame at 2:30 followed by the homecoming match at 3:00 PM.

A full list of the weekend’s events can be found on Geneva’s website. To listen to the full preview of Homecoming with Lindsay Courteau, hit the play button below!

Frank Sparks starts the morning with news at 6:30 on Beaver County Radio. 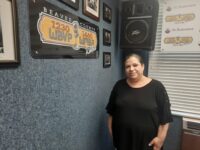 “It’s our job to be aware of other resources in the community that can help somebody, to make their situation a little bit less difficult.”

The Women’s Center Of Beaver County continues to help all victims of domestic violence within Beaver County. They offer consultation, shelter, and legal advocacy among other services to those seeking help with their situations, and they connect with other agencies throughout the area in order to help victims obtain the best solution. October is recognized as National Domestic Violence Awareness Month throughout the United States.

Ann Colella-Murray of the Women’s Center joined Matt Drzik on the October 4 edition of A.M. Beaver County to discuss the services that the Women’s Center provides, as well as the circumstances that lead to help being sought out. “We rarely have victims of domestic violence contact us the first time they were hit,” she stated. “We’re far more likely to see people who have been involved in violence long-term before they finally pick up the phone.”

The Women’s Center operates a 24-hour Helpline for victims seeking assistance in cases of domestic violence; the number is (724) 775-0131. Further information about what services are provided by the Women’s Center–all of it free and all of it confidential–can be found at their website: womenscenterbc.org.

The full interview with Ann Colella-Murray can be heard here:

Frank Sparks starts the morning with news at 6:30 on Beaver County Radio. 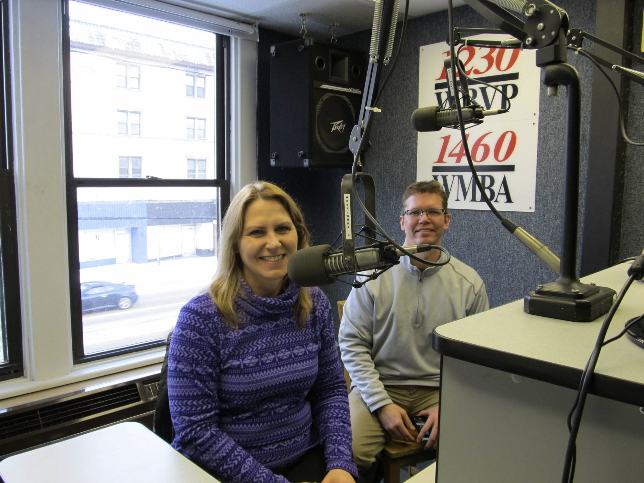 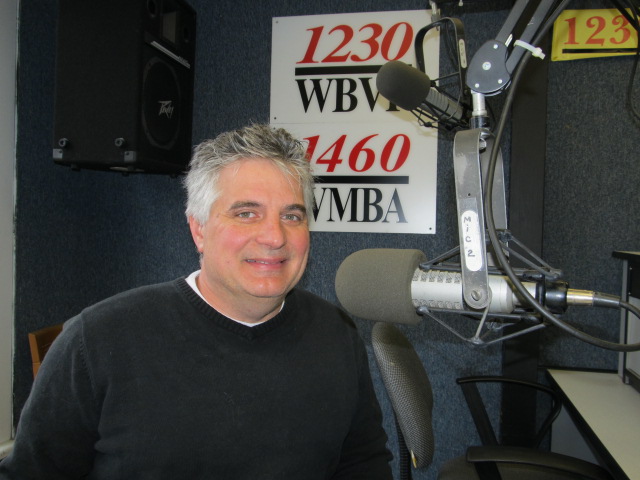