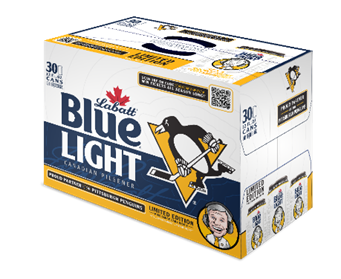 Pittsburgh Penguins center Evgeni Malkin skates during the first period of an NHL hockey game against the Chicago Blackhawks in Chicago, Sunday, Nov. 20, 2022. (AP Photo/Nam Y. Huh)
CHICAGO (AP) — Pittsburgh forward Evgeni Malkin has played in his 1,000th NHL game, becoming the 11th player to reach the milestone with the Penguins. Malkin made his debut with Pittsburgh on Oct. 18, 2006, scoring in the second period of a 2-1 loss to New Jersey. The center helped the Penguins to Stanley Cup titles in 2009, 2016 and 2017. It looked as if Malkin was going to try free agency for the first time last summer. But he decided to stay in Pittsburgh for a four-year contract worth $6.1 million annually. Now he joins teammate Sidney Crosby as the only players with 1,000 games for the Penguins.

Pittsburgh Penguins’ Jason Zucker (16) can’t get his stick on the puck in front of Toronto Maple Leafs goaltender Matt Murray (30) with Maple Leafs’ Rasmus Sandin (38) defending during the first period of an NHL hockey game in Pittsburgh, Tuesday, Nov. 15, 2022. (AP Photo/Gene J. Puskar)
By WILL GRAVES AP Sports Writer
PITTSBURGH (AP) — John Tavares scored his 400th goal as the Toronto Maple Leafs raced by the Penguins 5-2. Tavares became the 107th player in NHL history to reach 400 goals when he beat Casey DeSmith in the first period. Michael Bunting scored twice for the Maple Leafs, who won for the fifth time in seven games. Matt Murray stopped 34 shots in his first game against Pittsburgh, who he won a pair of Stanley Cups with earlier in his career. Sidney Crosby and Rickard Rakell scored for the Penguins.

Members of the Pittsburgh Penguins celebrate a goal by Jeff Petry (26) in the second period of an NHL hockey game against the Washington Capitals, Wednesday, Nov. 9, 2022, in Washington. (AP Photo/Patrick Semansky)
By STEPHEN WHYNO AP Hockey Writer
WASHINGTON (AP) — The Pittsburgh Penguins beat the Washington Capitals 4-1 to end their seven-game losing streak. Pittsburgh finished the game down two defensemen because of injuries. Forward Jeff Carter even skated a shift out of position in the third period when another defenseman left the ice. The Penguins scored two soft goals on Darcy Kuemper to win for the first time since Oct. 22. The skid was the organization’s longest since losing 10 in a row in 2006 during Sidney Crosby’s rookie season. The Capitals lost for the sixth time in eight games.

(File Photo)
CALGARY, Alberta (AP) — Nazem Kadri had two goals and an assist to extend his points streak to six games as the Calgary Flames beat the Pittsburgh Penguins 4-1. Jonathan Huberdeau had his first goal with Calgary and Michael Stone also scored as the Flames won for the fifth time in six games. Evgeni Malkin had the lone goal for the Penguins (4-2-1), who lost consecutive games in regulation in Alberta after starting the season with points in their first five games. Calgary’s Jacob Markstrom finished with 32 stops and improved to 4-0-0. Pittsburgh’s Casey DeSmith had 31 saves, falling to 0-1-1.

Edmonton Oilers players celebrate a goal against the Pittsburgh Penguins during third-period NHL hockey game action in Edmonton, Alberta, Monday, Oct. 24, 2022. (Jason Franson/The Canadian Press via AP)
EDMONTON, Alberta (AP) — Leon Draisaitl had a goal and two assists as the Edmonton Oilers used a four-goal second period to rally for a 6-3 win over the Pittsburgh Penguins. Evander Kane, Zach Hyman and Ryan Nugent-Hopkins each had a goal and an assist, and Tyson Barrie and Ryan McLeod also scored for the Oilers. Jack Campbell finished with 32 saves. Rickard Rakell had a goal and an assist, Sidney Crosby and Bryan Rust also scored and Jason Zucker had two assists for the Penguins. Tristan Jarry had 41 saves.

Montreal Canadiens’ Kirby Dach celebrates after scoring the wining goal in overtime to defeat the Pittsburgh Penguins in NHL hockey game action in Montreal, Monday, Oct. 17, 2022. (Paul Chiasson/The Canadian Press via AP
MONTREAL (AP) — Kirby Dach scored 3:09 into overtime, lifting the Montreal Canadiens to a 3-2 victory over Sidney Crosby and the Pittsburgh Penguins. Nick Suzuki had a goal and an assist for Montreal, which trailed 2-0 after two periods. Cole Caufield also scored, and Kaiden Guhle had two assists. It was Dach’s first goal since he was acquired in a July trade with Chicago. Evgeni Malkin had two goals for Pittsburgh, and Bryan Rust had two assists. DeSmith made 36 saves.

“This team is built to win right now.”

That “team” is the Pittsburgh Penguins, who open their 2022-23 regular season against the Arizona Coyotes at PPG Paints Arena on Thursday night. The Penguins Penguins Radio network color analyst Phil Bourque joined Matt Drzik on the morning of the game (October 13) to discuss the upcoming season for the Penguins, who signed Evgeni Malkin and Kris Letang to extended contracts during the past offseason.

“They need to pay ownership and management back for bringing the team back together again,” Bourque said, “Because a lot of people thought ‘There’s no way we can bring Tanger AND Geno back’, and they found a way to do that.” The return of Malkin and Letang with Penguins captain Sidney Crosby marks the 17th consecutive season of the trio playing together–tying the North American sports record.

Penguins management added several new faces to the lineup in the offseason, including Ty Smith, Jan Rutta, and Ryan Poehling…but the one new face that Bourque sees having the biggest impact is defenseman Jeff Petry. “Jeff Petry is a guy that I think will lighten the load for Kris Letang, as far as what’s expected for a defenseman for driving some offense,” Bourque stated. “The one thing we were kinda lacking was jam, some toughness on the backside. That’s why I think they moved Mike Matheson and John Marino, and brought in Jan Rutta and also Jeff Petry.”

As far as the matchup against the Coyotes, Bourque favors the Penguins on paper, but the Stanley Cup Champion knows the dangers of overlooking an opponent: “If you’re peeking a little bit towards your next opponent, which is against the Tampa Bay Lightning on Saturday night, you’re gonna get punched in the nose in your home opener against Arizona.” Bourque suggests that in order for the Penguins to win tonight, is to “have a great start, get the fans into it, get the lead, and then just pile on.”

Coverage for the Penguins’ game against Arizona on Beaver County Radio begins with pregame at 6:30 PM, and then Phil Bourque will join play-by-play man Josh Getzoff with the call of puck drop at 7:00 PM.

To listen to the full conversation with Phil, hit the play button below!