TODAY: Possibility of Snow tapering off and ending this morning but skies will remain cloudy this afternoon. Some rain may mix in. High 44F.

SATURDAY: Partly cloudy skies during the morning hours and will become overcast in the afternoon. Slight chance of a rain shower. High 56F.

Then-prosecutor James Wilson alleged Neill used a company set up by her brother as a “conduit through which Dr. Nicholas Trombetta could channel money to himself, his sister, his mother and other persons.”

Thankfully, there were no injuries in a Thursday morning fire at 2365 River Road in North Sewickley Twp.— Unfortunately a dog and cat were killed.

North Sewickley Township Assistant Fire Chief Randy Syphrit said a passerby saw smoke coming out of all the windows at 10:11 a.m. and reported it. Syphrit said he believes the cause to be electrical…maybe a salt water aquarium’s pump.

Neither homeowner Linda Maloney nor her son, Justin Patterson were in the home at the time of the fire.

The loss of about 850 jobs with the potential closing of First Energy’s Nuclear Power Plant could be only the beginning of difficulties for the area.

According to Mike Rubino, executive director of the United Way of Beaver County said, “First Energy Corp. has been an unbelievable partner, not just to the United Way, but to other charities in Beaver County. They’ve always gone over and above.”

“It’s a tough day,” Rubino said after hearing the news that FirstEnergy Corp. could deactivate the plant within the next three years. “It’s definitely going to be a challenging next couple of years.”

FirstEnergy’s impact in the community goes well beyond the United Way. According to the company’s website, FirstEnergy pays upwards of $4 million annually in property, payroll and utility taxes to support area schools.

None of this includes the volunteer hours and food donations from the Power Plant employees.

* DENSE FOG ADVISORY REMAINS IN EFFECT FOR BEAVER COUNTY UNTIL 10 AM THIS MORNING…LIMITED VISIBILITIES WILL MAKE TRAVEL VERY DIFFICULT.
IF DRIVING, SLOW DOWN, USE YOUR HEADLIGHTS, AND LEAVE PLENTY OF DISTANCE AHEAD OF YOU. *

This year commemorates the 70th anniversary of when Beaver County’s first radio station, WBVP, was heard over the airwaves for the the first time on May 25, 1948.  To mark the historical event, each week, another “70th Anniversary Moment” will be showcased on the airwaves and published on the station’s online feeds.

Through the years, many famous bands have been a part of WBVP, WMBA and sister F.M. radio station, WWKS.  National acts like Tiny Tim, Tony Bennett,  Motely Crue and Great white have been live on the air in the Beaver Falls studio.  Many local bands have also enjoyed having their music air on the stations, or have been interviewed, like B.E. Taylor, Donnie Iris, The Granati Brothers, Sidewinder, Dawn Savage and The Neon Oranges, among many others, but the band that perhaps has had the longest and deepest relationship with the radio stations over the years is The Jaggerz.

In March of 1970, The Jaggerz ‘ hit song “The Rapper” spent 6  weeks on the Billboard Magazine top 10 list. It was one of three songs released  by the group to crack Billboard’s top 100.  The original group consisted of Jimmy Ross, Benny Faiella, Jim Pugliano, Donnie Iris, Thom Davies and Bill Maybray.  They were all from in and around Beaver County.

So, it only makes sense that in June of 1968, it was while listening to WBVP and driving through Beaver Falls, that the Jaggerz heard themselves for the first time being played on the radio.  Jimmy Ross remembers the day well. “We had just recorded ‘Baby I Love You’ in Philadelphia, and on that day.  Bill Maybray and I  were driving up 7th avenue in Beaver Falls in a 1959 Chevrolet Biscayne sedan.  We were heading to a rehearsal at Club Naturale and the song came on the radio.  We pulled over to the side of the road to listen.  It was the first time that we ever heard one of our songs on the radio”.   Club Naturale was a popular bar and nightclub that was located at the corner of 7th Avenue and 9th street in downtown Beaver Falls.  A few years ago, the building was razed and an empty, grassy lot is now on that corner.

In 1973, Jimmy Ross and Donnie Iris joined WBVP show host Tony Scott, also know as Sam Nicotero, in the studio and presented him and the station with plaques to honor the station for being supportive of the band and its music.  One of the plaques is still on display in the station offices at 1316 7th Avenue in Beaver Falls.

The tradition will continue this May, as The Jaggerz, now comprised of Ross, Faiella, Hermie Granati, Dennis McAbee, Paul Martello and Chris Patarini, will perform at the WBVP 70th Anniversary Gala to be held on May 25, 2018 in the Grand Ballroom of the General Brodhead Hotel in Beaver Falls. 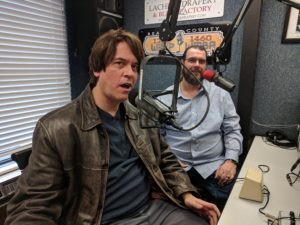 The guys will welcome in the band Mule Factory,  George Boe will be on the bass, Hap Wichryk will pay mandolin and Jennifer Ann will be standing in on guitar. Mule Factory  will perform live for our listeners and for the Facebook Live audience.

Beaver County Commissioners chairman Dan Camp says a candidate will be interviewed Monday for the financial consulting position that would replace full time financial administrator Ricardo Luckow, who was fired. Camp says there is no timetable to hire a consultant. If a suitable candidate is not found, Camp said the commissioners will consider hiring a firm to do the financial work. Camp says, so far, firms contacted work on contracts as short as three months.

THE BEAVER COUNTY COMMISSIONERS HELD A VERY SHORT WORK SESSION THIS MORNING…AND HAVE COME UP WITH NO SUCCESSOR TO THE FIRED RICARDO LUCKOW. BEAVER COUNTY RADIO’S GREG BENEDETTI HAS DETAILS. Click on ‘play’ to hear Greg’s report…