There was no strike today by social workers employed by Beaver County. Union employees from three agencies whose deal ended last summer reached a tentative deal with the county last night, which means they did not resort to a scheduled one-day work stoppage. Beaver County Commissioners Chairwoman Sandie Egley told Beaver County Radio’s Mike Romigh on Teleforum today that the 11th hour talks were “conversations” between the county and the union “family”. She said most of the talks surrounded the issue of health care benefits. She says county workers will be paying more towards their healthcare coverage. The union will present the tentative agreement to the general membership for a ratification vote.

An engaged couple was killed in a Raccoon Township house fire last night. According to officials at the scene, the fire started at around 11 p.m. at a home on State Route 18 in Raccoon Township. A woman and her fiancee were found dead on the porch. Their identities have not been released at this time. One firefighter was hurt while battling the blaze. The extent of his injuries is not known. It took about three hours to extinguish the flames. The cause of the fire is under investigation.

A man has died after he was struck by a train in North Versailles late last night. Allegheny County authorities have not released the victim’s identity and tell the Pittsburgh Tribune-Review that so far is unclear why the victim was on the tracks.

Vice President Joe Biden visited the University of Pittsburgh today to talk up the White House “It’s On Us” campaign against college campus sexual assaults. Biden’s office says well over 250,000 people so far have signed the campaign pledge to intervene and to encourage an environment where sexual assaults are unacceptable.

John Morganelli is a Democrat running for Pennsylvania Attorney General. During today’s Telefourm with Mike Romigh, Morganelli said he wants to change the negativity currently surrounding the state attorney general’s office. He also pledged to tackle the growing epidemic of heroin addiction across the state. Morganelli is from the Lehigh Valley region.

Beginning today…Phase Two begins of the road reconstruction on 11th Street in Ambridge borough. Beaver County Radio News Correspondent Sandy Giordano reports that the project is between Melrose Avenue and the borough building. The Park N’ Ride will enter on the Merchant Street side of 11th Street. To access the borough building, motorists are asked to enter from Duss Avenue. The project will continue weather permitting.

The QUIPS 2015-2016 PIAA champs basketball team and coaches were honored with a parade Saturday that started at the Auto Zone with firetrucks from Aliquippa, Center, Hopewell and Monaca leading the way. Beaver County Radio News Correspondent Sandy Giordano reports Mayor Dwan Walker addressed the crowd at a pep rally in the high school gym and spoke of how proud he was of the team for their accomplishments. Coach Nick Lackovich and his team went 30-0 this year.  A banquet honoring the team is scheduled for this spring.

April has been designated as Distracted Driving Awareness Month in Pennsylvania. Senator Rob Teplitz of Dauphin County introduced the legislation in Harrisburg. The resolution was unanimously adopted by the Pennsylvania Senate.

(Aliquippa, PA)  Aliquippa has had plenty of occasions to honor champions throughout the years from the town and Saturday was no exception.  Bright sunny skies showcased the recently crowned undefeated  Pennsylvania  boys class AA basketball champions as they rode through the town on firetrucks in a parade held in their honor on Main Street.  WBVP and WMBA sports anchor Bob Barrickman was at the event yesterday and took these pictures.  This was Aliquippa’s fifth boy’s high school basketball state championship, previously winning the title in 1949, 1989, 1994  and 1997. 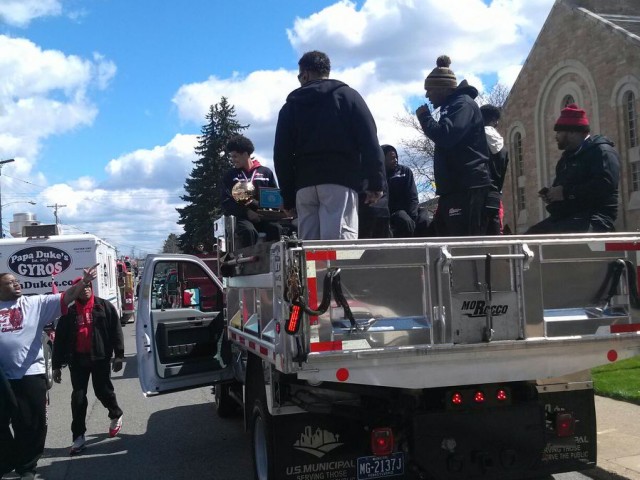 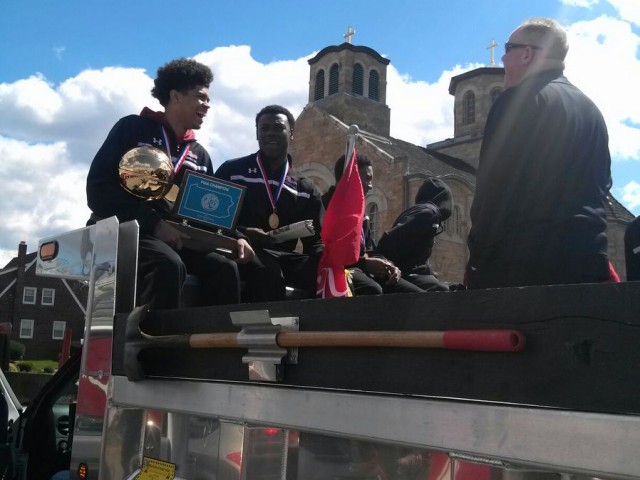 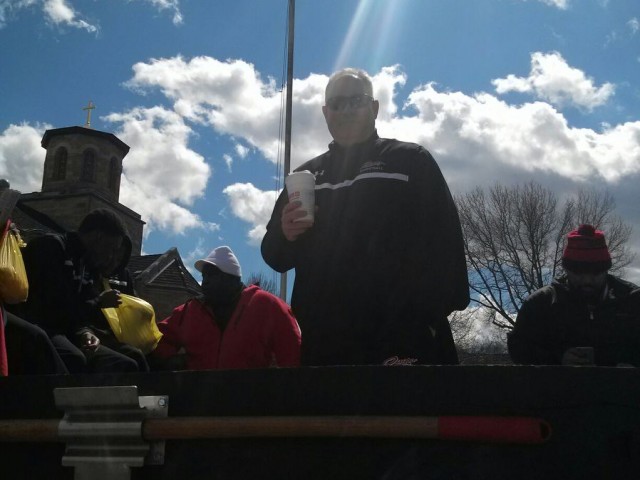 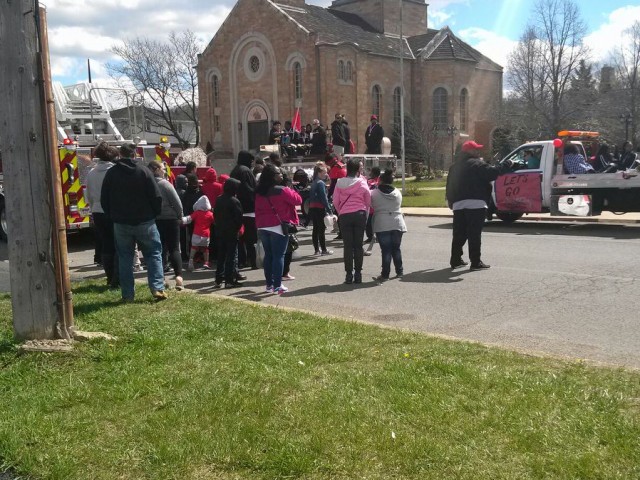 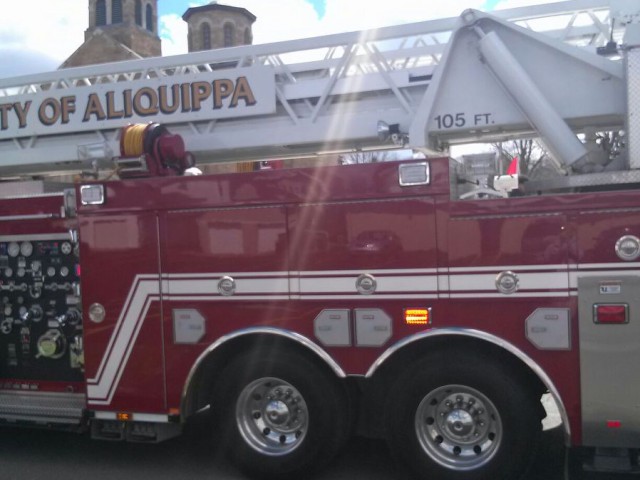 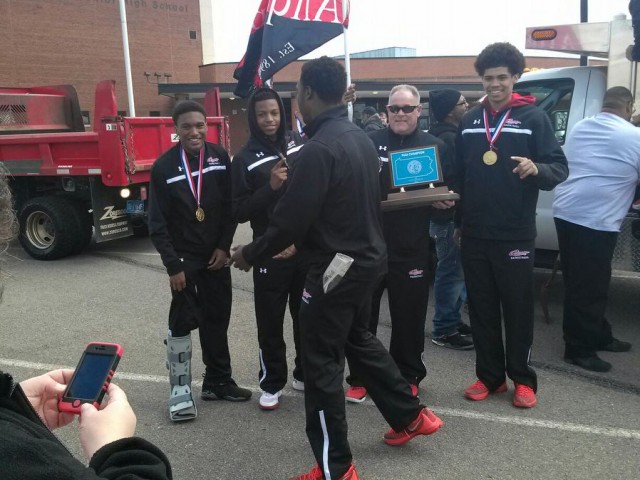 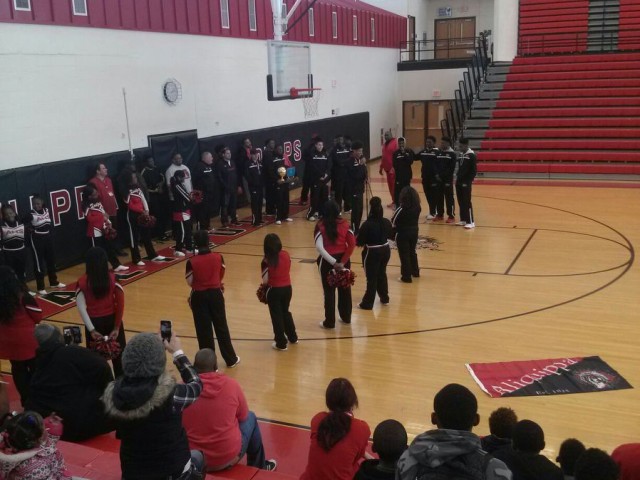 Champs are honored at Coaches Corner