TODAY – MOSTLY SUNNY SKIES THIS MORNING WILL
BECOME OVERCAST THIS AFTERNOON.
HIGH NEAR 40.

WE HAVE OFFICIAL WORD ON THE NEW VOLUNTEER COACH AT HOPEWELL THIS FALL.
BEAVER COUNTY RADIO NEWS CORRESPONDENT SANDY GIORDANO HAS MORE. Click on ‘play’ to hear…

This breaking news report brought to you by…

This year commemorates the 70th anniversary of when Beaver County’s first radio station, WBVP, was heard over the airwaves for the the first time on May 25, 1948.  To mark the historical event, each week, another “70th Anniversary Moment” will be showcased on the airwaves and published on the station’s online feeds.

In April of 1984, WMBA General Manager, Diane Brown,  was looking to hire a new talk show host for the Ambridge radio station and ended up starting a talk show career that lasted nearly thirty years when she gave the job to Rick Bergman.  The host at the time of “Air Your Opinion”,  Barb Trehar, had recently moved on to work at KDKA radio in Pittsburgh.

Stepping in to host “Air Your Opinion” as one’s first radio gig  on WMBA in that era was no small task.  The show was very popular and was a staple of the WMBA line up going all the way back to the station’s  start up in 1957.  Bergman was following a group of very talented and beloved hosts that had previously held court during the 9 A.M. to Noon time slot including Roy Angst, Nick DeSantis and Trehar.  Bergman, however, was up to task.  He blended an easy going, subdued style with a very quick wit and well read intelligence that was quite unique.  Bergman also offered a more liberal perspective on many social issues up for discussion on the airwaves and became a hit among many listeners.

In 1984, WMBA featured a line up that included Stan Presbysz serving as morning show host and Program Director.   Bergman then did “Air Your Opinion” from nine until noon.  Bob Conrad aired a news program during the noon hour.  Jaye Phillips and Debbie Smith hosted the popular “Yankee Trader” show from 1 until 3 P.M.  followed by a music show that aired until station sign off at dusk.

Rick Bergman did so well that he grabbed the attention of the competitors to the north in 1988, when WBVP and WWKS station owner, Ted Ruscitti, summonsed Bergman to meet him at the Sewickley Holiday Inn for a lunch meeting.  Bergman was hired and began a daily show called “Afternoon Talk” that aired on WBVP from noon until 7 P.M. The program featured a couple  of extended news blocks and live feeds from Channel 11, WPXI T.V. in Pittsburgh.

In addition to the attention received  from WBVP,  Rick Bergman had also shown up on the radar screen of executives  at KDKA radio and he was hired on at that station in 1987.  Bergman did part time work there as a weekend talk show host until 2013.

After leaving WBVP in 1993, Rick Bergman put his intellectual capacity to work and started a career as a public school teacher, where he continues to work to this day.

One of Bergman’s most cherished memories of working at WBVP and WMBA happened in the spring of 1986 when he received a press invitation to attend a press luncheon with President Ronald Reagan at the White House while working at WMBA.  As luck would have it, Reagan  opened up the forum for questions that day.  Rick hesitated at first, but after hearing another media representative quiz the president about the Iran Contra Affair, he got up the nerve to ask a question as well on the same subject.  Even though Bergman had hosted a daily talk show and had talked to thousands of people over the airwaves, this was different.  cameras could be heard in the background whirring away as he began to voice his question.  The eyes of Ronald Reagan bore down through his soul as the President’s  attention, along with everyone else’s in the room focused on Bergman’s query.  As Bergman tells the story, he nearly fainted, but did eventually ask a question and the President responded, but can’t remember much more.  The following day, a small reference to Bergman’s question and Reagan’s response was reported in a USA  Today follow up story about the press luncheon.

At Wednesday night’s meeting, the Aliquippa School Board officially announced former Aliquippa quarterback Mike Warfield as the new head coach for the football team, starting in 2018.

Warfield spoke with Beaver County Radio about what he plans to do different with the student athletes at his helm:

And when does the new actions begin to take shape?

Warfield takes over for Mike Zmijanac, who led the Quips to a PIAA championship in 2003. 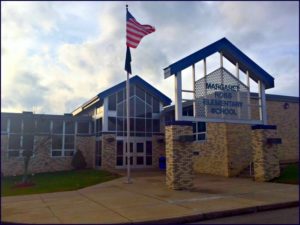 The flags flying high above Rochester and the Beaver River will soon have a newer sheen to them.

PUSH Beaver County announced late Monday that they have made a $4,000 donation to the local chapter of “Flags Across America” to upgrade the current American Flags being flown from Rochester. PUSH Vice President Nathan Kopsack spoke to Beaver County Radio about the reasoning behind making the donation:

So when can residents and passers-by start seeing the newest additions? Kopsack says the timetable isn’t a sure one: