WBVP was founded by Frank Smith, Thomas Price and Charles Onderka.  Smith and Price previously worked at WWSW in Pittsburgh and Onderka worked at The Pittsburgh Post Gazette before teaming up and putting WBVP on the air on May 25, 1948.

WBVP was originally a 250 watt class D station with a non directional signal broadcasting at 1230 khz. The original on air line up included Arnold Felsher, George Allen, Gerry Goff, Gertrude Trobe, Chuck Wilson, Alan Boal and Don Kennedy.  A couple years later, another popular broadcaster and future Pennsylvania Lieutenant Governor, Ernie Kline, was hired. The original studio was located in the third floor above the Rio Grill  at 1216 7th Avenue in Beaver Falls.  A 150′, free standing tower served as the station’s antenna at the transmitter property in Pulaski Township, PA.

WMBA  in Ambridge was  the second station put on the air by a group out of Pottsville, PA called Miners Broadcasting Service, Inc.  Miners Broadcasting Service, Inc.  also owned and operated WPAM in Pottsville, PA, which went on the air in April of 1946. The company was comprised of eight residents of Harrisburg, Pottsville, Tamaqua , Hazelton, and Lansford, PA including Joseph L. Maguire, Kenneth F. Maguire, John T. Maguire, John W. Grenoble, Evan Evans, Patrick J. McCall, John Koch and James J. Curran. WMBA was originally a 500 watt day-timer at 1460 Khz. and was granted a conditional license to broadcast on September 19, 1957.  The original studio was headquartered in the upper floor of Action Tire located on Duss Avenue in Ambridge.  Two 200′ guyed towers were installed at the transmitter site in Bell Acres, PA to create the directional signal.  Ken Maguire moved west to manage and run the company’s new operation in Ambridge.  Joining Maguire in those early days were station announcers Roy Angst, Dave Denniston, Dudley Woodrow “Woody” Lester, Ken Maguire, Jr. and Ray Fallon.  Walter “Red” McCoy was the engineer that put  WMBA on the air.

WBVP F.M. at 106.7 Mhz. came on the air in June of 1960 with 16,500 watts of power and was almost entirely a simulcast of  its A.M. counterpart.   A 250′ Blaw-Knox freestanding tower that had been purchased from WRYO in 1953 and then moved to the Pulaski Township transmitter site served as the antenna for both WBVP-A.M. and WBVP-F.M.

In 1967, a newspaper company out of Connecticut called Hall  Communications bought the WBVP 1230 A.M. and WBVP 106.7 F.M. pair of stations. Leading the charge for Hall Communications back then was President Robert Hall and Vice President Dick Reed. Shortly after purchasing the company, Hall Communications moved WBVP A.M. and WBVP F.M.  two blocks north to the basement of a bank building located at the corner of 14th Street and 7th Avenue in Beaver Falls.  During the Hall regime, many improvements were accomplished including construction of what is still the tallest antenna in Beaver County in 1975. The new 517′ guyed tower at the WBVP Pulaski Township transmitter property was part of a massive upgrade for both radio stations.  Improvements also included new A.M. and F.M.  transmitters to accommodate power increases that had been granted for both stations. WBVP was raised to 1000 watts and the F.M. station got approval for an increase to 47,000 watts and was also reclassified as a class B license.  New call letters, WWKS, were assigned to the F.M. station at that stage of the game as well. Not long after the new towers and transmitters were in place and up and running, WBVP and WWKS moved to newly renovated studios at 1316 7th Avenue Beaver Falls.  The former Sakraidas Dress Shop building was purchased by Hall Communications in 1978. The transition to the new headquarters happened in 1980 after extensive remodeling.

Miners Broadcasting Service Inc. sold WMBA in 1970 to Pittsburgh television ad salesman, John Bride, President of his newly formed company, Bride Broadcasting, Inc. Bride was a very accomplished, bright young star in the media business, having earned a law degree and then began his career working at the Federal Communications Commission before his work in the Pittsburgh TV market. During Bride’s tenure, WMBA moved its studio and offices from the upper floor of the tire shop on Duss Avenue to a building  on 14th street in the historic Old Economy section of Ambridge in 1980.

Perhaps the most famous moment for WBVP happened on April 22, 1981, when then President Ronald Reagan unexpectedly called in and joined in the conversation with host Dave Felts on “A.M. Connection”, one of the station’s talk shows. Reagan joined the on air dialogue already in progress between Felts and Pennsylvania Congressman Eugene Atkinson. The broadcast was reportedly the first time that President Reagan spoke publicly after recovering from a gunshot wound from would be assassin, John Hinkley, on March 30, 1981.  Media outlets from all over the nation covered Ronald Reagan’s appearance on WBVP that day.

The mid eighties brought changes in ownership for both WBVP and WMBA.  Back around 1970, a talented youngster named Ted Ruscitti from Hopewell, PA  began working at WMBA as both an announcer and an engineer. After quickly achieving  notable success as a programming and technical expert at other stations in big markets, Ruscitti  teamed up with his wife, Marilee, to form M.T. Communications and bought WBVP and WWKS, in 1985.

At the other end of Beaver County, Ambridge native, Donn Wuycik formed a company called Donn Communications and bought WMBA from John Bride in 1986. Wuycik  continued working on the process to change WMBA from daytime only broadcasting to 24 hour a day service. The project originally began with an application submission to the Federal Communications Commission filed by John Bride in 1980.  Wuycik’s effort’s ultimately paid off and WMBA was granted approval from the FCC to broadcast 24 hours a day in 1988.   The change in license for WMBA required creating different day time and night time broadcast coverage areas. In order to achieve that, two new 406′ guyed towers were constructed to go along with one of the existing 200′ guyed towers. To make it all work, the three antennas were then paired with new broadcast  pattern switching equipment that was installed at that time at the station’s transmitter site in Bell Acres, PA.  WMBA also moved the studio and offices from 14th street to 761 Merchant Street in Ambridge in 1987 as part of a complete makeover orchestrated by Wuycik for the operation.

In 1990, The Baltimore Radio Show, led by Managing Partner Harry Shriver out of Towson, MD bought WBVP and WWKS from the Ted and Marilee Ruscitti. Other partners in The Baltimore Radio Show included Daniel Bowles, Vilma J. Smith, Hope H. Barroll III, Lewis A. Noonberg, John H. Somerville, Robert S. Maslin, Jr. and Robert M. Barroll. The Barroll and Maslin Families were majority owners in the company. Shriver was a well known and successful radio veteran who had enjoyed great success managing WFBR in Baltimore before putting a group of investors together and getting into station ownership. The Baltimore Radio Show would run the operation until 1994.

Carnegie native, Frank Iorio, Jr., along with partners, Aaron Daniels and Mike Schwartz, formed a company called Radio Partners and bought WBVP and WWKS from the Baltimore Radio Show in December of 1994.  Then, in a rather quick turn around, the threesome sold  WWKS ,106.7 F.M.  to Secret Communications just ten months later in September of 1995. Following the sale of WWKS, Frank Iorio, Jr. then bought out  Schwartz  and Daniels and formed  Iorio Broadcasting, Inc. and continued to own and operate WBVP.  Through several more mergers and sales, format and name changes, WWKS, 106.7 F.M., is now known as WAOB -F.M. and is owned by St. John’s Mission.

In June of 2000, a long time era of station competition ended when the owner of WBVP, Frank Iorio, Jr., bought  WMBA, from Don Wuycik and his family members.   By the end of that year, WMBA station operations were moved north to Iorio Jr.’s building and joined WBVP in its office and studio location at 1316 7th Avenue in Beaver Falls.

In 2014, a long time station employee originally hired by Ted Ruscitti back in 1986, Mark Peterson, bought WBVP and WMBA through a company that he and his wife, Cynthia, formed called Sound Ideas Media, LLC.  Many changes and new technical improvements for WBVP and WMBA would happen in the next few years. The two stations were rebranded as “Beaver County Radio” and unveiled a new logo and website, beavercountyradio.com in 2015.  In 2018, 250 watt F.M. translator licenses were approved for both WBVP (W257EA-99.3 F.M) and WMBA (W239CR-95.7 F.M.).  In August of 2019, equipment Installation was completed at the WBVP Pulaski Township, PA transmitter site and W257EA-99.3 F.M. started broadcasting a simulcast of WBVP and WMBA programming.  Construction of W239CR-95.7 F.M. at the WMBA transmitter site in Bell Acres, PA. is projected to be completed by late 2021.  The stations began full time online audio streaming in February, 2020 via beavercountyradio.com, along with apps available through Google Play, Apple and Alexa platforms.  In 2019, an old office work space the was remodeled and turned into a live audio and video production venue called “The Beaver County Radio Sound Stage”. Soon afterwards, online video streaming simulcasts of select station programming and local high school football games became a regular occurrence.

All of these upgrades and additions to WBVP and WMBA didn’t go unnoticed as the stations were named the 2020 Beaver County Chamber of Commerce Large Business of The Year. A couple commemorative  videos were made for the occasion. 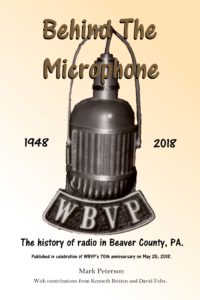 Hungry for more history about radio?  Order your copy of “Behind The Microphone –  The History of Radio in Beaver County, PA”. The book was written and published in 2018 by Mark Peterson and is available on Amazon for $12.30.